Bernina Express links Tirano, the border town between Italy and Switzerland, with St Moritz. The line is a UNESCO World Heritage site which gives some indication that it is something special!

With a population of around 10,000 Tirano is quaint place with decent hotels and restaurants, my hotel recommendation would be the Hotel Centrale in the old town and for food I recommend the Bistro Merizzi.

A visit to the http://www.palazzosalis.com/ is a must:

A fun way to get there is to travel on the Little Yellow Train, which gives a guided tour of Tirano and drops you at the Palazzo Salis:

In Tirano there are 2 separate stations; the Swiss and the Italian ones that are opposite each other on a cafe lined square, perfect to grab a coffee.

The route of the Bernina Express is a true link between Southern and Northern Europe as you cross The Alps and pass from the Italian speaking south to the German speaking north. 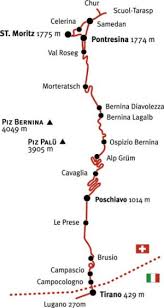 There are two options for travel on the Bernina Express route.

1.The actual Bernina Express which is a tourist orientated train with an onboard at seat dining service in panoramic carriages.

2. The regular train linking the communities along the route, and my personal preference especially as the windows of the train open to give amazing photo opportunities!

There is first class, with a view out of the front of the train:

Or second class, which is very comfortable:

The journey itself really is breathtaking, and justifies two visits as the summer and winter experiences are so different! You see lakes, glaciers, mountains, rural communities and some engineering masterpieces.

Leaving Tirano, at 429 meters above sea level, the train travels along the streets of the town before reaching the circular viaduct at Brusio, a quick way of increasing the altitude of the line by 116 meters: 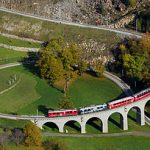 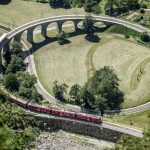 The 10 kilometers between Brusio and the lovely village of Poschiavo, worth a break of journey to perhaps have lunch or a coffee, passes along the banks of the Lago di Poschiavo Lake and also along the streets of a string of villages. 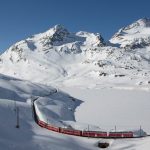 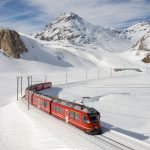 The stop at Alp Grum is the first stop in the German speaking region and is also located at the tree line, so any higher elevations are treeless, the inhospitable climate with snow for most of the year and strong winds would, I suspect, prevent trees growing anyhow. In the winter time from the warm coziness of the train the contrast of the snow and strong wind with the accompanying windchill when the doors of the train open is something special… Also make way for snowboarders and skiers who use the train up in the mountains to get to the best runs.

Alp Grum is also home to the Restaurant Alp Grum where in summer time the sunny terrace is another perfect place to break the journey and take in the views. 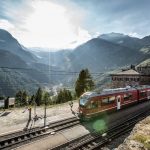 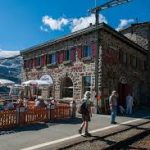 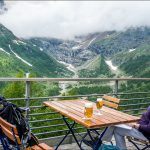 The train continues to climb from Alp Grum to the highest point on the line at Ospizio Bernina, look out for the various snow breaks and snow tunnels (galleries) that protect the railway from drifting snow in this exposed part of The Alps. This is an indication of the extreme nature of the elements: 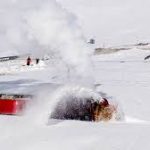 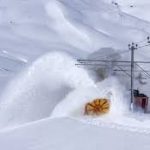 After leaving Ospizio Bernina the Lago Bianco (White Lake), frozen for most of the year, comes into view and on the further onwards there are fantastic views of the Morteratsch Glacier and the Bernina Massif range of mountains. 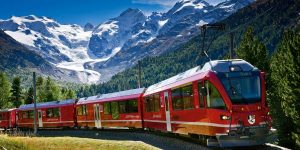 The train continues its descent towards St Moritz with its international jetset scene, or hop off the train a couple stop before and stay in the more relaxed Pontresina. This is a good base to explore the St Moritz area from being just 10 minutes by train from St Moritz itself.