Two for One Belgium Trains

Belgian railway company SNCB has announced that it is launching its Duo Ticket this weekend, allowing two travellers to take the train for the price of just one person.

With the huge success of the first edition of the Duo Ticket which was brought in during the end-of-year festivities, SNCB is now reintroducing the popular ticket.

How does it work?

Travellers can buy the Duo Ticket via the SNCB app, on the website nmbs.be, as well as from any ticket machine or ticket office.

The ticket allows two people to travel for the price of one Standard Ticket – which can range from €2.50 to €21.80 per trip, depending on distance. The promotion will be run from 2 April to 31 August. 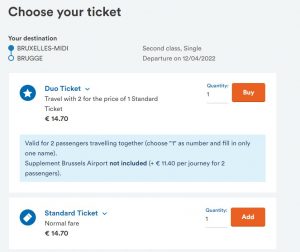 “This promotion gives people an opportunity to leave the car at home more often. It supports the climate objectives and the increase of rail usage for travel,” the company announced in a press release on Wednesday.