Lufthansa and Deutsche Bahn (DB) have announced that they are focusing on the rapid expansion of joint train-to-flight services. In Frankfurt on 8 March 2021, the two companies presented their plans for a joint product initiative that will see the Lufthansa Express Rail network expanded by five additional cities: 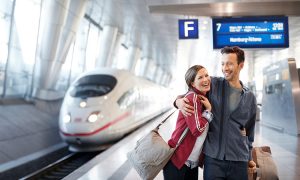 Deutsche Bahn and Lufthansa already offer 134 daily feeder trains to Frankfurt Airport from 17 German cities. In the second half of 2021, another five cities will be added. Starting in July 2021, for the first time, it will be possible to travel to Frankfurt Airport with Lufthansa Express Rail from Hamburg and Munich and, commencing in December 2021, from Berlin, Bremen and Münster.

In addition, starting in December 2021, Sprinter Services – limited stop services – will also travel to Frankfurt Airport for the first time. From Munich and Nuremberg, there will be direct trains to Frankfurt Airport twice a day in three and two hours, respectively, with no additional stops in between – half an hour faster than current services and precisely timed with the departure and arrival times of flights at Lufthansa’s hub airport.

In addition, new Sprinter connections will make their debut from December 2021. The rail journey between Munich and Cologne will be shortened to less than four hours.