Cross Country is the train company that covers routes that do not fit into the geographically regionalised franchising model. Running from Aberdeen to Penzance (one train runs the whole route), Manchester to Bournemouth, and Birmingham to Cambridge. 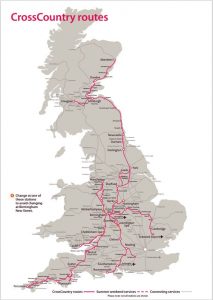 The distances covered by their trains can be significant with Aberdeen to Penzance at just over 500 miles taking over 13 hours being the longest train ride in Britain. The duration of the train rides means that one train could actually be used for morning commuting and later in the day evening commuting i.e. the trains serve many different markets.

It does appear that Cross Country do not want long distance passengers on its trains and prices its tickets accordingly. The reason for this is a lack of capacity on its network at key times of the day. Long-distance passengers travelling on cheap advance fares would simply clog up the trains. 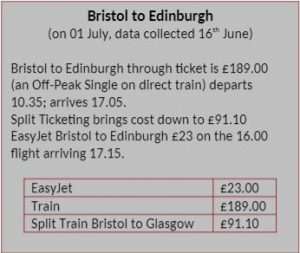 Why does this happen?

A through train operates from station A to station F.  The through-ticket is priced at £200.

Selling tickets to passengers travelling between the intermediate stations – A to B; B to C; C to D etc – nets more for the Train Operating Company than offering a discounted through fare.In practice, this means that it is only on longer distance routes to/from London that the national rail system is seen as seeking to cater for long-distance travellers of over 250 miles.
With the demise of many inter-regional city air connections pre and during Covid ,  a major opportunity for rail to step up to the plate and offer a sound alternative to the pre-Covid 19 air travel option has been missed. There will be lots of very tired long-distance motorway drivers and more air passengers.

In the short term in a phrase “split ticketing”! The creative, and legitimate, way to bring down the cost of your UK train tickets! Split ticketing combines discounted fares on a route to bring the cost down of a individual ticket.

Why does this happen? It is a quirk of the UK fares system that sees different companies setting different fares for sections of a route. One company sets the through price of the trip A to B whereas other companies set shorter distance fares from A to C and another company for C to B!

Check out my Book Tickets page:

Also I’m happy for people to contact me on Social Media @AndyBTravels with questions.

The longer term solution, in my opinion, is for Cross Country to get more trains to offer more seats and relieve capacity constraints in their network and thus allow them to offer better value long distance fares.