Travelling from Gatwick Airport to Berlin on an early flight, at 06.20, with Norwegian Airlines (my first experience with them) I took advantage of the No1. Lounge using my Priority Pass to enter. The lounge opens at 4am which worked well for me as I arrived at 4.05am having travelled on the 03.05 Thameslink train from Blackfriars.

The lounge is located upstairs in the South Terminal and is quite easy to locate even though they are using a temporary entrance. An efficient check in process saw me in the lounge within a couple of minutes. There were just 3 other people in the lounge. 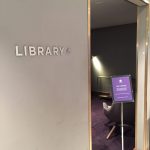 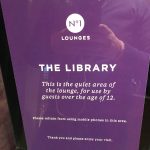 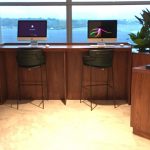 I chose to sit in the library which is a designated quiet area with no children under 12 allowed. There is a small working area with 6 spaces at a work desk with sockets, just UK power outlets. There are a couple of iMacs for public use in the main lounge. I did not use the wifi so cannot comment on its speed.

A good selection of newspapers and magazines were available which could be taken away with you to read on the flight.

There is a mixture of seating options from tables for 2, sofas and some small booths seating 4/5 people and a couple of seats at the bar. 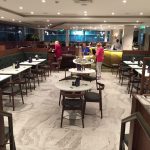 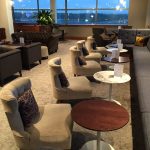 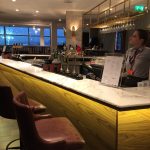 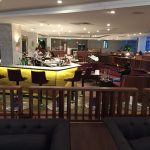 The food setup was for breakfast with cereals, Greek yoghurt, pain au chocolate, croissant, muffins and fruit salad. From the breakfast menu there were eggs benedict or florentine, toast or beans on toast. I chose a bacon roll, with brown sauce, from the all day menu with the other option being a fish finger sandwich. In terms of drinks there were coffee machines with decent coffee, a range of teas and juices. 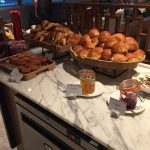 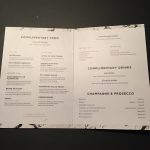 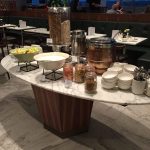 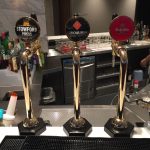 The bar was serving drinks and had on draft Stowford Press Cider, Curious Brew lager, Esterella lager and a range of spirits. Prosecco and Champagnes were available for a charge and I noted a few people toasting the start of their holidays at 5am!

The staff in lounge were efficient if a little cold initially but once the ice was broken they were very chatty and appeared to enjoy working at the No1 lounge.

My previous No1 lounge experience was at the North Terminal at Gatwick, due to the BA Lounges being closed, and it was not a good experience so I was actively looking not to use the No1. South Terminal Lounge but my alternative, Virgin Clubhouse, did not open until 7am so it had to be No1. and thankfully I was impressed!

Would I recommend the lounge? Without a doubt yes. The main terminal was busy, and it being half term lots of children, so the No1. was a tranquil haven.

Join me and David Feng chat about all things China High Speed Rail.As one reviewer says:"This is skillfully done. Woven around talk about trains in China are fascinating snippets about Chinese life, geography, commuting patterns and forthcoming developments like the Winter Olympics."www.andybtravels.com/en-route-blog/china-high-speed-rail-podcast ... See MoreSee Less

China High Speed Rail is the most extensive network in the world and is continually expanding, we chat about trains and life in China.
View on Facebook
· Share